A baker’s dozen of my favorite novels

Fair warning: this is NOT a comprehensive list of my all-time most cherished novels. It’s merely a list of the 13 trade novels I’ve enjoyed the most among the many I’ve read and reviewed in this blog in the past three years. So, no bellyaching please, that I’ve left out Philip Roth or Leo Tolstoy or somebody else you think is the all-time greatest novelist! Please note, too, that I’m excluding the mysteries and thrillers I review as a category of their own. Which is not to deny that some of these books are thrilling in their own right.

What follows are the 13 novels in alphabetical order by the authors’ last names. Each is linked to my review of the book.

A 19-year-old Berkeley woman hides out on a Chilean island from the FBI and the Las Vegas criminal gang pursuing her.

The Windup Girl, by Paolo Bacigalupi

By the 23rd century, the oceans have risen by twenty feet, and only a seawall protects the city of Bangkok. Genetic engineering has run amok around the globe, leaving only the Thai Kingdom to resist the “calorie companies” that are the only source of food for most of the world.

People of the Book, by Geraldine Brooks

A Pulitzer Prize-winning novelist portrays the five-century history of conflict surrounding a cherished religious book, from the Spain of the Inquisition to the Balkan Wars of the 1990s.

They Eat Puppies, Don’t They?, by Christopher Buckley

Political satire of the highest order. Like all superior satire, this book isn’t just funny — its droll treatment of politics in Washington and Beijing is spot-on accurate.

The Round House, by Louise Erdrich

A National Book Award-winning novel about a brutal crime and its consequences on a Chippewa reservation in the Upper Midwest.

A 19-year-old Iraq war hero on a Pentagon tour of cities around the country encounters the reality of American civilization today — and finds he doesn’t like it much.

Sea of Poppies, by Amitav Ghosh

Set in 1838, an extraordinarily rich tale of class conflict, exploitation, and forbidden love in South Asia against the background of the opium trade.

The Fear Index, by Robert Harris

Set in Geneva, this taut thriller takes the reader into the world of a brilliant American scientist who has developed mathetical formulas that make billions in profits for his hedge fund.

A novel that digs beneath the artificial veneer of life in North Korea to examine  the mindless lives of its people, from the lowliest convict to the Dear Leader, Kim Jong Il, himself.

A tense and beautifully-constructed story set in Hollywood in its heyday as the euphoria of victory in Europe and (later) in the Pacific gives way to the hysteria of the Red Scare, the Hollywood Blacklist, and the notorious House Un-American Activities Committee.

A high school English teacher in a small Maine town is lured through a portal in time that leads directly back to September 9, 1958. Jake’s mission: to hold out until 1963 and kill Lee Harvey Oswald before Oswald can assassinate JFK.

The Debba, by Avner Mandelman

A naturalized Canadian citizen, formerly a trained killer for the Israeli armed forces in the 1960s, returns to his homeland when he learns of his father’s murder in Tel Aviv. Suddenly he is pulled back into the ethically murky environment he had fled seven years earlier.

In a future USA with a tyrannical right-wing government in power and privacy a thing of the past, a hapless Russian-American seeks love in vain as New York enters into the final stage of total collapse.

A brilliant Indian novel about the 19th Century opium trade 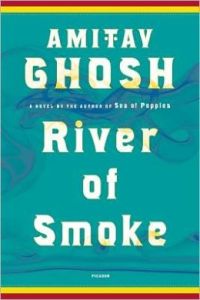 A review of River of Smoke, by Amitav Ghosh

Balzac (and lots of people after him) thought that “Behind every great fortune there is a crime.” Nowhere is that aphorism more baldly illustrated than in the 19th-Century opium trade that enriched England, Scotland, and the United States and created a score of hereditary fortunes that have left their mark on the world for nearly two centuries since. After all, when Europeans introduced China to the practice of mixing opium with tobacco in the mid-18th Century, the one-sided trade in Chinese porcelain, tea, silk, and other goods was rapidly draining Europe of silver and reinforcing China’s position as the world’s richest country. The opium trade reversed that trend. Early in the 19th Century, with the Industrial Revolution gathering force in Europe, China’s nearly two-century-long decline  was underway. Meanwhile, massive profits from opium enriched the endowments of Harvard and Yale, helped build Princeton and Columbia Universities; launched the fortunes of the Astors, the Delanos (FDR’s grandparents); and bankrolled the Bell Telephone Company, antecedent of AT&T.

River of Smoke is the second book in Amitav Ghosh’s planned Ibis trilogy set among the momentous events of the massive 19th-Century opium trade between India and China. The first book in the trilogy, Sea of Poppies, set the scene with an in-depth look at the harvesting and manufacture of opium in India. River of Smoke details the life at sea and in the foreign enclave in Canton of the immensely rich men who dominated the trade, principally Britons.

Ghosh’s sprawling novel spans the years 1838 and 1839, detailing the events in South China that led to the First Opium War. The central plot-line follows the journey of a poor Indian Parsi (Zoroastrian) named Bahram who had risen to lead the trade division of a celebrated Mumbai shipbuilding company owned by his wealthy in-laws. Though not yet rich himself, Bahram has become the dean of the Indian opium traders, realizing profits for the family as great as those of many of the British and Americans but, in the racist fashion of the times, he is looked down upon as “inferior.” However, he comes to play a principal role in the traders’ increasingly tense and threatening dealings with the newly energized Chinese government, which has resolved to end the opium trade. (Bahram is the author’s invention, but the English and American traders depicted in the novel come straight from the pages of history.)

Any lover of language will find the writing of Amitav Ghosh irresistible. I certainly did. Both the dialogue and the narrative text in Sea of Poppies were enchanting. Ghosh had immersed himself in contemporaneous dictionaries and wordlists of 1830s India and Britain to reproduce the language and the vocabulary of not one but several English dialects. In fact, a great many of the novel’s characters are historical figures who left behind memoirs, letters, parliamentary testimony, and other records, and as Ghosh notes in his acknowledgments, “Much that is said in this book is taken from [the characters’] own words.” Even more colorful is the hybrid language that emerged from the marriage of English and Hindi and surfaces in dialogue throughout the book. But in River of Smoke, it’s the pidgin of 19th-Century Canton that stands out, and wonderful it is to behold!