Where it all began for Harry Hole: the Norwegian master-sleuth Down Under 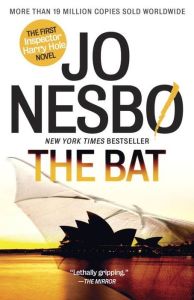 A review of The Bat, by Jo Nesbo

It’s pronounced “HOO-leh.” Not “Whole” or “Hole” or “HO-lee” or any other Americanized bastardization of the Norwegian “Hole.” And that’s just one of the many many fascinating things you’ll learn from reading The Bat, Jo Nesbo’s first novel in the celebrated Harry Hole series of detective novels!

In The Bat, the then 32-year-old detective is in Sydney to lend assistance to the Australian police following the murder of a young Norwegian woman there. Harry is paired with an older detective, an Aboriginal man named Andrew Kensington, who seems bent on introducing him to the history, culture, and language of those he still sometimes thinks of as “his people.” But it’s not long before Harry finds himself immersed with Andrew in the search for a serial rapist and murderer — and, to no reader’s surprise, he quickly demonstrates that he can turn up leads and spin theories far faster than any of his hosts.

The Bat displays some of the signs of the many outstanding Harry Hole novels to follow: thoughtful and intelligent characters who wear their weaknesses on their sleeves, extremely complex plotting, and enough blood and guts to satisfy a depraved Hollywood producer. However, this first book in the series shows a young writer just warming up to his craft. There are long, beautifully constructed speeches where disjointed dialogue would have been more likely, and the story is slow on the uptake, in contrast to Nesbo’s later efforts that invariably start off in mid-story.

Throughout The Bat you’ll find Nesbo musing much as he does in the later books:

The title of this novel, we learn, represents the term for Death in one of the more than 100 Aboriginal languages still spoken in Australia. And death there is aplenty in The Bat. It’s a nicely crafted book despite its flaws, and the suspense will likely hold you until the very end.