Mossad, the PLO, and a young Palestinian refugee in a spy story set in London and Berlin 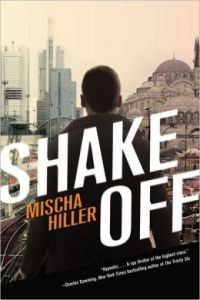 A review of Shake Off, by Mischa Hiller

Ever wonder how publishers decide how to market books? For example, how to decide whether to feature a book as a “thriller” instead of, say, a “deeply moving novel of love and loss”? Mischa Hiller’s novel, Shake Off, raised questions like that in my mind.

Michel Khoury, a bright young man with a rare gift for languages, is recruited from a foster home at the age of 15 to be educated and trained in the USSR by the PLO. It is now the late 1980s, with the Soviet empire crumbling and Yasser Arafat holding on to power in the Palestinian diaspora. For some years now, Michel has been serving as a courier, an accomplished polyglot shuttling from Berlin to London to Geneva to Athens and Istanbul under the control of an older man named Abu Leila (“Father of Leila”), a surrogate father figure. Living in what the English call a “bed-sit,” a single room sans kitchen down the hall from a bathroom, Michel masquerades as a student at the School of Oriental and African Studies, taking language courses he doesn’t need. When he meets Rachel, a beautiful young doctoral student in anthropology living next door, he finds himself increasingly drawn to her just as disaster strikes a courier he has enlisted in London. Soon, Michel finds himself the subject of interest by intelligence agencies of indeterminate origin — possibly more than one of them, and probably including Mossad — and is forced to dodge the increasingly familiar figures who are following him.

As a novel written by a Palestinian whose protagonist is a survivor of the 1982 Israeli-Phalangist massacres in the Sabra and Shatila refugee camps, Shake Off does a decent job conveying the profound sense of loss and the lingering terror that live on in Michel Khoury. However, the book was marketed as a “spy thriller.” Thrilling it wasn’t. The story hangs on a question of identity that waas resolved to my satisfaction about one-third of the way through the novel, so the twists and turns in its plot held no magic for me. I kept reading despite the slow unfolding of the plot because I found it intriguing to see the world through the eyes of a Palestinian refugee (albeit one with an extensive knowledge of Jewish history and Israeli attitudes). It’s worth reading for that reason alone.