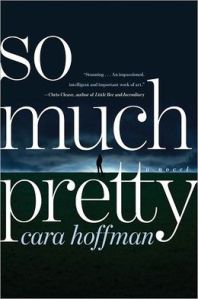 A review of So Much Pretty, by Cara Hoffman

I can’t get Alice Piper out of my head. Here she is, dashing off a 7th grade paper in English prose worthy of a graduate student. There she is again, fearlessly leaping from bar to bar on the high wire in her parents’ barn. Still again, she is deeply engrossed in a probing philosophical discussion with her parents at age 6. Alice is a bundle of special gifts, a phenomenon.

On its most fundamental level, So Much Pretty is the story of Alice Piper and her parents, from the time of her birth through her mid-teens. But this is no cookie-cutter coming-of-age novel. It’s an inquiry into ethical conduct in an age of moral ambiguity. It’s a study of rural America struggling for survival in a declining industrial economy. It’s a critique of industrial farming. And it’s a novel of suspense that relentlessly drags the reader with increasing urgency toward a conclusion that no one is likely to guess.

Alice and her parents, Gene and Claire Piper, both physicians, have moved from New York City to the upstate town of Haeden, population 2,000, driven by a compulsion to avoid the ethical complications of the city and find a simpler life on the land. Gene devotes himself to promoting organic farming and environmental awareness while Claire brings in a modest income from work at a nearby health clinic. Their “family,” close friends Michelle (“Mickey”) and Constant, both physicians too, are no longer close by. Mickey has enlisted in Doctors Without Borders and moved to the Democratic Republic of Congo. Constant (“Con”) has taken a job with a shady pharmaceutical giant to test new drugs for a salary of $300K, money he has used to buy the land where the Pipers are homesteading and to help out them and his wife from time to time.

The pivotal event in So Much Pretty takes place after Alice has entered high school. Wendy White, a likable young woman who works as a waitress in the local diner, has gone missing, and the whole town, the Pipers included, are swept up in the months-long search for her (or, as feared, her body). But the timeline in this beautifully crafted novel is twisted and turned on itself a dozen times like a cat’s cradle gone mad, so that the reader learns of the young woman’s disappearance very early in the book. Hoffman takes us on a roller-coaster ride through time, ricocheting from the early 1990s in New York City to the late 2000s in Haeden and back again, again and again, and from the perspective of one character after another. Along the way, she paints vivid pictures of many of the players in this morality play: Stacy Flynn, George Polk Award-winning big city journalist who has come to edit Haeden’s little newspaper and research the local consequences of environmental crime; Captain Alex Dino, the good-old-boy police chief who insists that only “drifters” can commit serious crime in Haeden; Wendy White, emerging from anonymity as her adolescent fat melts away and she finds her first real boyfriend.

So Much Pretty was Hoffman’s first novel to reach a wide audience. The New York Times Book Review termed it the Best Suspense Novel of 2011.

Hoffman appears to be as intriguing a character as her protagonist. Raised in upstate New York herself in a place much like Haeden, she dropped out of high school and moved to Europe, working for a time in a hotel in Athens. Back in upstate New York, where she was raised, she worked her way into a job, and ultimately a decade, as an investigative journalist for a series of newspapers; gave birth to a son; and became involved with a series of “alternative” — we used to call them “underground” — ventures,  including a “learning collective” and the long-running newspaper, Fifth Estate. Clearly, writing the story of Alice Piper came naturally to her.