Pentagon waste and fraud, and who’s really responsible for them 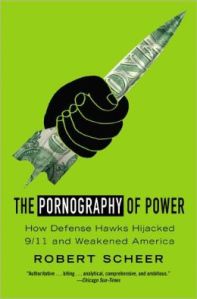 A review of The Pornography of Power: How Defense Hawks Hijacked 9/11 and Weakened America, by Robert Scheer

Books about current affairs, especially those by journalists, rarely keep their edge once the headlines they address have vanished from the news. A 2008 book by former Berkeley activist Robert Scheer’s is a notable exception. Scheer wrote five years ago about the spectacular buildup of the U.S. military machine following 9/11, and his report transcends the facts and circumstances of the story. The Pornography of Power delivers insight into what should be one of the issues that most preoccupies concerned Americans: the seemingly unassailable position of the military-industrial complex that Dwight Eisenhower warned us about more than half a century ago.

Over the eight years George W. Bush inhabited the White House, the U.S. military budget more than doubled, from about $300 billion to just under $700 billion. (In reporting these figures, the Office of Management and Budget notes that they exclude expenditures for the Departments of Homeland Security and Veterans’ Affairs. Clearly, they also exclude funds for the CIA, which runs its own military operations, as well as interest on the debt incurred to finance the wars in Iraq and Afghanistan.)

You might be tempted to think that these gargantuan increases are understandable, given the expansion of the wars in Iraq and Afghanistan — but you would be wrong. In fact, a huge proportion of the money spent on the military in the first decade of the 21st Century was not to support troops in the field or provide them with the weapons and protection they required. It was to finance the development and acquisition of new, high-tech weapons systems that could never be deployed in an asymmetric war against terrorists or insurgents.

The central insight of The Pornography of Power is that the waste and fraud in the military budget isn’t hidden in the cracks of obscure documents — it’s right out front in multi-billion-dollar expenditures for unnecessary new weapons. How do we know these weapons are unnecessary? Because the military brass told us so — and Congress simply forced the Pentagon to develop (or continue developing and producing) them, anyway. As Scheer reports, Congress voted hundreds of billions of dollars to develop and produce big-ticket weapons systems such as nuclear attack submarines and the trouble-plagued F-35 “joint strike fighter,” often on the basis of absurd arguments that they were needed to defend us against Al Qaeda.

The occasional glaring example of fraud complicates this picture of Pentagon waste, but simple, straightforward corruption (cushy corporate jobs for a cooperative Pentagon bureaucrat, for example) is a minor factor. The real problem are the politicians — liberal Democrats like Barbara Boxer as well as the usual suspects on the Republican right — who fearfully back spending money on these boondoggles because they expect blowback from constituents if they don’t. And if we can’t count on Senators and Representatives who champion cuts in the military budget out of the other side of their mouths, then what hope is there to eliminate the waste?

Despite the occasional jarring reminder that Scheer is writing about events several years in the past, and some circumstances that have changed during the last five years, The Pornography of Power remains relevant reading today. You can count on one thing above all from Bob Scheer: straight talk.