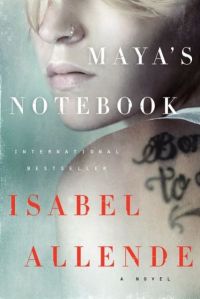 A review of Maya’s Notebook, by Isabel Allende

Pick up a copy of Isabel Allende’s new novel, Maya’s Notebook, and get ready for a wild and wonderful ride through the years and up and down the length of the Western Hemisphere. Though structured as a coming-of-age novel of young Maya Vidal, recounting the four seasons of her twentieth year, Maya’s Notebook ranges from the glorious madness of Berkeley, where she was born and raised, to the back alleys and casinos of drug-addled Las Vegas and an Oregon rehab center for incorrigible teenagers, to the magical solitude of an island off the Chilean coast. Along the way in this wrenching journey you’ll find yourself drawn back in time to the CIA-inspired coup that overthrew Chilean president Salvador Allende and the murderous repression that followed for seventeen years under the late unlamented Augusto Pinochet. Maya’s Notebook is a tour de force. Only a writer of Isabel Allende’s maturity and rare skills could pull together all these disparate threads and weave them together so artfully into such a pleasurable, and often laugh-out-loud funny, reading experience.

Maya Vidal is (of course) an unusual young woman. As she describes herself at the outset, “I’m nineteen years old, female, single — due to a lack of opportunity rather than by choice, I’m currently without a boyfriend. Born in Berkeley, California, I’m a U.S. citizen, and temporarily taking refuge on an island at the bottom of the world . . . I’m five-ten, 128 pounds when I play soccer and several more if I don’t watch out. I’ve got muscular legs, clumsy hands, blue or gray eyes, depending on the time of day, and blond hair, I think, but I’m not sure since I haven’t seen my natural hair color for quite a few years now.” Her father is Chilean, an airline pilot, “handsome as a bullfighter and just as vain,” her runaway mother a Danish flight attendant whom Maya long fantasized was a Laplander princess.

Why does this striking young woman find herself on an island in Chiloe, where she’s taller than everyone else? Therein lies the tale. On arriving, when she meets her designated host, Manual Arias, an aging sociologist friend of her grandmother, Maya introduces herself by saying, “Hi! I’m on the run from the FBI, Interpol, and a Las Vegas criminal gang.” Only deep into Maya’s Notebook does it become unmistakably clear that she’s not joking.

Maya is raised by her grandparents in a sprawling house in Berkeley. The great love of Maya’s life is her grandfather, her Popo, her grandmother’s second husband, Paul Ditson II, a huge and compassionate man as black as she is white, a professor of astronomy at UC Berkeley. In exile in Chile, her constant companions are the old sociologist whose tiny home she shares; the local schoolteacher who suffers from unrequited love for the lonely old man; and a lame dog christened Fahkeen the day Maya arrived when a cab driver hears her try to get rid of the beast, yelling “Shoo! Get away, fucking dog!”

Almost in passing, Allende tosses out unforgettable passages. Berkeley is “that gritty, radical, extravagant city, with its mix of races and human pelts, with more geniuses and Nobel Prize winners than any other city on earth, saturated with noble causes, intolerant in its sanctimoniousness.” The school where Maya’s grandparents sent her “taught using an Italian system of experimental education in which the students did whatever the fuck we wanted. The classrooms had no blackboards or desks, we sat on the floor, the teachers didn’t wear bras or shoes, and everyone learned at their own pace.”

Maya’s Notebook is Isabel Allende’s 19th book. Allende, a long-time Bay Area resident, is Chilean, a first cousin once removed of the late president (not his niece, other than in the Spanish vernacular). Clearly, she’s spent a lot of time in Berkeley.