Vladimir Putin, the KGB, and the restoration of Soviet Russia 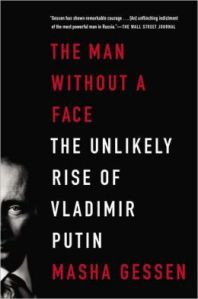 A review of The Man Without a Face: The Unlikely Rise of Vladimir Putin, by Masha Geffen

Every once in a while I’m shocked to learn anew that the American news media has missed the mark in its reporting of events around the world. Masha Gessen’s recent portrait of third-term Russian President Vladimir Putin, The Man Without a Face, is an excellent case in point.

For example, one year ago, in December 2011, we learned about large demonstrations in Moscow protesting the obviously rigged outcome of the latest Russian elections, which had awarded nearly 50 percent of the vote to the President’s party, United Russia. What I didn’t learn from the reports I read here in America was that estimates of the crowd in Moscow ran as high as 150,000 and that “[p]rotests were held [the same day] in ninety-nine cities in Russia and in front of Russian consulates and embassies in more than forty cities around the world.” Reports in The New York Times and other U.S. news sources gave the impression that the events were the work of Russia’s tiny, long-beleaguered liberal minority and meant little. In fact, the demonstrations and marches were far more broad-based than the liberals had ever shown themselves to be capable of organizing. Masha Gessen tells the whole story in The Man Without a Face.

Or consider the experience of the brave souls who put themselves forward as candidates for President to replace Putin. It’s possible but unlikely that you came across something awhile back about Garry Kasparov, the world’s most famous Russian and the most celebrated chess player of all time, when he announced he was running for President. Kasparov could easily have attracted crowds of thousands anywhere in the vast expanses of Russia, but everywhere he went he found the doors locked at the venues he’d arranged and often found himself speaking to 50 or 100 people out-of-doors. He persisted for months nonetheless. until it was made clear to him that he was risking his life by doing so. Masha Gessen tells the whole story in The Man Without a Face.

Roughly the same thing happened to Mikhail Prokhorov, the 6’8″ Russian billionaire who bought the New Jersey Nets (now the Brooklyn Nets) professional basketball team. When the regime asked him to be the front man for a moribund political party to give the appearance of democratic choice in the 2012 Presidential elections, Prokhorov took the assignment seriously. He mounted a vigorous campaign, fashioning an agenda for reform, traveling throughout the country, and speaking out boldly — until he was informed that if he continued to pursue the Presidency he would lose all his businesses, his freedom, and possibly his life. I’d been aware of Prokhorov’s abortive campaign, but I learned none of the rest of this from news reports in the United States. Masha Gessen tells the whole story in The Man Without a Face.

You might wonder, as I had, how the democratic path that Russia was on through most of the 1990s had veered so sharply, and so suddenly, rightward toward a brand of authoritarianism reminiscent of the tsars and the commissars. Gessen’s answer lies in the circumstances surrounding the selection of Vladimir Putin as Boris Yeltsin’s successor in 2000 by the circle of intimates known as “The Family” who surrounded the ailing Russian President.

After a decade in office, Yeltsin was gravely ill and acting erratically as a result (not because of heavy drinking, Gessen asserts). His popularity had plunged into the low single digits, and the Russian people were seeking “solace in nostalgia — not so much in Communist ideology . . . but in a longing to regain Russia’s superpower status. By 1999, there was palpable aggression in the air, and this was a large part of the reason Yeltsin and the Family were rightly terrified.” They feared the rise of an ultra-right-wing nationalist who might destroy all that they had achieved in a decade and cast about for a like-minded standard-bearer as Yeltsin’s successor who marshal popular support.

“Imagine you have a country and no one to run it,” Gessen writes. “This was the predicament that Boris Yeltsin and his inner circle thought they faced in 1999.” In desperation, knowing virtually nothing of the man’s character, his work habits,  or his political beliefs, they turned to a low-level former KGB operative who had recently been elevated to head the KGB’s successor, the FSB — Vladimir Putin. They named him Premier, then Acting President when Yeltsin resigned, brought in a team of image-makers and campaign specialists, mobilized the pro-democratic community, pulled together a sanitized biography in three weeks, and ran him for President. As The Guardian wrote in its review of this book, “[g]rey, ordinary and seemingly incorruptible, Putin is the man without a face, on to whom others can project whatever they want.”

Tragically, Putin’s true nature only became apparent in the months following his election in 2000. Somehow, his self-description as a “thug” — a claim he made on many occasions — had been overlooked, and the thugocracy he built during his first two terms as Russia’s President came as a total surprise to nearly everyone except the very few who knew him well. Investigative journalists who turned up evidence of corruption or worse were simply murdered one after another, their killers never arrested. While the senseless war in Chechnya went on year after year after year, attacks by Chechen terrorists were brutally put down by the Russian military, with hundreds of civilian hostages losing their lives — even, in one case, while the terrorists were engaged in negotiations with the police. Business tycoons who refused to support the regime were imprisoned on trumped-up charges and ownership of their businesses transferred to Putin and his cronies. Putin himself built up a personal fortune rumored to be as high as $40 billion. That estimate might be exaggerated, but the total is certainly somewhere in the billions, as Putin built himself a palace on the Black Sea at a cost of more than $1 billion.

Masha Gessen knows whereof she writes. She lives in Moscow, where she has held a series of increasingly high-profile jobs in journalism. Her career had barely begun when the Soviet Union collapsed in 1991. The Man Without a Face is a personal book, and opinionated, but it represents a lifetime of work side-by-side with many of the individuals whose actions are described.