Another exceptionally good sci-fi novel from an emerging master 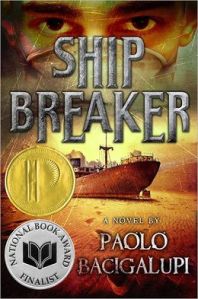 A review of Ship Breaker, by Paolo Bacigalupi

Great science fiction requires fully fleshed, memorable characters, a beautifully realized alternate reality, and masterful prose. Many sci-fi classics written by authors whose names you may recognize (Isaac Asimov, Robert Heinlein, Arthur C. Clarke) fall short in some or even all of these dimensions. A young American author named Paolo Bacigalupi puts them to shame with his much more recent writing.

Bacigalupi’s first novel, The Windup Girl, won both the Hugo and Nebula Awards (the top literary prizes in the field, chosen by the fans and the writers respectively). It’s one of the best sci-fi novels I’ve ever read — and I’ve read a lot of them. This tour de force was followed by two young adult novels, The Drowned Cities and Ship Breaker, both of which I found to be excellent examples of the craft and in no way limited by the author’s intention to write for a young audience.

All three stories are set in a post-apocalyptic world that I gather to be sometime in the 22nd Century. Humankind’s failure to arrest global climate change and our unstoppable addiction to fossil fuels have drowned nearly all the planet’s coastal cities and left most of the human race living hand to mouth in abject penury while a lucky few — in China and the United States — wallow in luxury because they control trade with armies of genetically engineered “half-men” bred for speed, strength, and loyalty.

Ship Breaker relates the story of Nailer, a small, 14- or 15-year-old boy with a homicidal father and a job as head of a crew of children and teenagers who are salvaging copper and other metals — and an occasional gallon of oil — from the derelict oil tankers run aground on beaches along the Gulf Coast. Following one of the killer storms that hit the coast virtually on a weekly basis, Nailer and his boss, a 16-year-old girl named Pima, stumble across a wrecked clipper ship that belongs to one of the trading companies that dominate the planet. Inside, they find a beautiful girl of about Nailer’s age who is clearly a “swank” raised in unimaginable wealth and privilege. The three young people, together with a renegade half-man named Tool, flee the fury of Nailer’s father (who covets the precious salvage on the shipwreck). Thus begins their adventure in search of the swank girl’s father and a secure new life for Nailer.

If you enjoy science fiction, you’ll love this book.