Will solar energy replace fossil fuels? An expert seems to think so 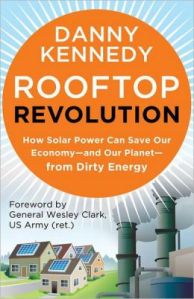 A review of Rooftop Revolution: How Solar Power Can Save Our Economy — and our Planet — from Dirty Energy, by Danny Kennedy

The basic facts are clear. The US must move to solar and other forms of renewable energy to slow down global warming; lower the environmental costs of extracting coal, oil, and natural gas; reduce the adverse public health impact of fossil fuel emissions; and end our dependency on overseas sources of petroleum.

But did you know that the move to solar energy is inevitable? That, sooner or later, the economic advantages of solar will be so compelling that the relatively few people today who still believe the coal and oil industries’ propaganda will eventually be forced to decide to install photovoltaic panels on their rooftops and commercial buildings?

That’s the message that emerges from reading between the lines of Rooftop Revolution, the paean to solar energy by Danny Kennedy, one of the avatars of the rising solar industry. Kennedy demonstrates with a wealth of statistics and a captivating narrative that the price of solar electricity from rooftop installations is on such a steep downward track, the pace of technological innovation in the industry is so swift, and the price of oil is on such an inevitable long-term rising trend, that within a very few years it will become impossible to ignore the widening gap in cost between electricity from solar and that from fossil-fuel generating plants — a gap in favor of solar.

However, Kennedy makes it clear that he isn’t satisfied to let history run its course. The urgent need to lower global warming, and the potential of solar energy to create millions of desperately needed new jobs, together force him to advocate for public support to urge changes in state and federal energy policy.

In Rooftop Revolution, Kennedy makes a powerful case for the adoption of solar on the basis of its job-creating power alone: the solar energy industry hires roughly twice as many people as the fossil fuel business per dollar invested. And the total number of jobs in the solar industry is growing at a ferocious pace while employment in the fossil fuel sector is shrinking.

As the author makes clear, a sensible federal policy of incentives to promote solar and not to encourage the use of fossil fuels could greatly speed up the move to solar energy. However, the powers that be in Washington DC have decided otherwise. Despite all the cries of foul from the US Chamber of Commerce and the oil industry that the government is giving away the store to the solar industry — they point to Solyndra as “proof” — the facts tell us a much different story. In fact, the oil, coal, and natural gas industry has received federal subsidies in the last decade that are more than an order of magnitude greater than those granted to renewables (about 10 times for nuclear, 11 times for natural gas and petroleum, and 22 times for coal!).

About that Solyndra case, by the way: the company was the only one of more than 40 firms that received loans under the same program and proceeded to fail, and the loan program had already set aside more than five times the loss from Solyndra as a reserve against bad loans.

Kennedy quotes Jeremy Rifkin’s assertion that “The great economic revolutions in history occur when new communications technologies converge with new energy systems.” This statement, which encapsulates the thesis of Rifkin’s 2011 book, The Third Industrial Revolution (reviewed here), meshes with Kennedy’s thinking in his description of the changing character of the electricity market. As the number of solar-equipped buildings on the grid increases, the role of the power companies will start to shift, employing them as brokers of a sort, managing the flow of the surplus electricity to fill in gaps elsewhere on the grid. However, Rifkin envisions this becoming the predominant or sole role of the power companies by mid-century; if Kennedy believes that, he doesn’t indicate so in Rooftop Revolution. Instead, he dwells on the technical challenges facing the industry to incorporate surplus solar energy amounting to even less than half the total power in the system. The technology to accomplish that is almost market-ready, Kennedy points out, but it’s not there yet.

Rooftop Revolution offers an appealing overview of the present and prospects for solar energy, written in an engaging conversational style and brought to life by the author’s autobiographical asides and his brief profiles of a number of the leading lights in bringing the power of the sun to life on Earth.

Danny Kennedy is a co-founder and Executive Vice President of Sungevity, a fast-growing firm in Oakland, California, that installs custom-fitted residential solar systems around the US and now in The Netherlands as well. Kennedy was a campaign manager for Greenpeace for many years before launching Sungevity and is widely considered a leading authority on global energy issues.

One response to “Will solar energy replace fossil fuels? An expert seems to think so”